I noticed some of my students playing a game of sorts the other day. They tear up strips of paper, and each person writes down the name of a person, an action, and a place or other detail, each on a separate slip. They put all the strips in a hat, pull out one strip of each category, and then they have to draw whatever scenario they can come up with based on the words they pulled out. The students were having lots of fun with their game, so I decided to steal the idea for a little extra practice over the Beginner’s French Reader stories we’ve been reading.

I wanted this activity to be relatively error-free, so today’s version was very structured. In particular, I thought this would be a good opportunity for students to get in practice with “they” forms. I took all the core vocabulary from the stories and sorted the words into people, actions and details (places, in this case). Each category was on a different color of paper, so it was easy for students to guide themselves through the activity.

Each group received a set of PAD strips. A dealer gave two people strips, one action strip and one detail strip to each student in the group. The students put these four strips together to make a sentence, like Arnaud et Thérèse cassent un pot de fleurs au supermarché, and then they drew out their sentence to show comprehension. Afterwards, all the strips go back in the basket, and the dealer starts another round.

The best part of the activity was the novel exposures. I love the Beginner’s French Reader stories, but they don’t hold interest for very long. This PAD activity gave students a new reason to look back at the stories for inspiration and a new opportunity to get several more exposures to the core vocabulary in novel and unexpected contexts.

The students really enjoyed the activity and were still on task after thirty minutes or so. Eventually the higher-level students started getting more creative: adding words, changing forms and reorganizing details to make more interesting (and often more “colorful”) sentences like Arnaud casse le pot de fleurs de Thérèse au supermarché. Next time, I think they’ll be ready for more independence with the activity, which will make it even more fun for them!

Here are a few examples from French 2 students who were working on forms of vouloir. For this version, they received a form of vouloir, an infinitive and a detail, but they had to supply the subject (a name or pronoun to match the form they received). It was a fun and easy quiz review activity and only took a few minutes to create. 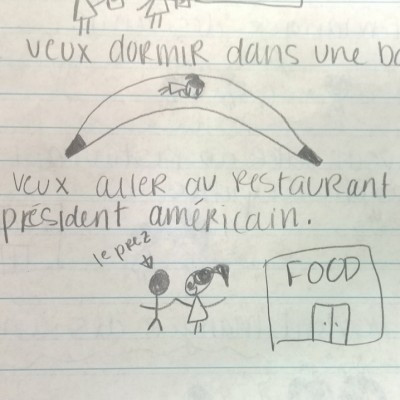